Ancient Iran has many celebrations and festivals, and in Iranian culture, each celebration has a specific symbol. As a symbol of the beauty of creation, the Haftsin table is one of the precious heritages of Iranian ancestors.

Have you ever thought about the background of the Nowruz celebration and the HaftSin table? Setting the Nowruz table will be beautiful if you get to know more ideas and find the reasons for placing each item on the table.

Nowruz is one of the oldest celebrations left from ancient times and has many customs. One of Iran’s most famous Nowruz ceremonies is setting the haft sin table.

Even today, the people of Iran prepare the Haft-Sin table a few hours before the time of New Year’s delivery, and the food items that begin with Sin, such as elderberry (Senjed), Sabze, Samano, coin (Sekke), apple (Sib), sumac, and garlic (Sir) are placed on the table.

With the advent of Islam in Iran, the Sofre Haft Sin of Iranians has been decorated with the Holy Quran. Each of the components of HaftSeen is a sign of concepts such as growth, birth, fertility, abundance, blessing, etc. In this article, we will introduce you to the philosophy of the Haft-Sin Table and the concepts of each Nowruz’s Sins. 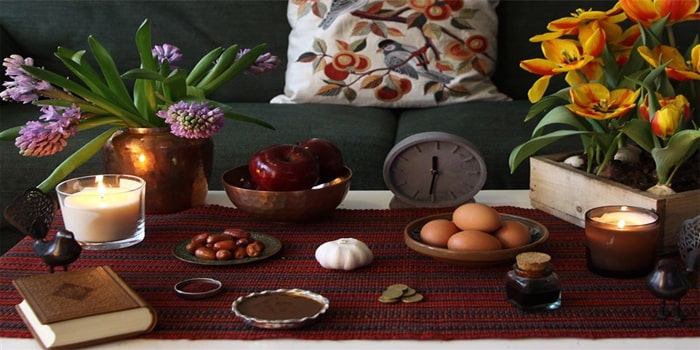 Haft sin is one of the most famous customs people care much at the beginning of the new solar year. On the Sofre Haft-Sin, items that start with the letter (S) are arranged, such as garlic, apples, coins, etc. In some root searches, Haft-Sin has been associated with Haft Chin, which means seven picks.

In the Sasanian religion, the number seven was considered sacred, and people planted seven seeds on seven different pillars during this period. It is notable that except for the Sins, most people put mirrors, candlesticks, Quran, a water tank, goldfish, sweets, etc. on the Sofre Haftseen.

Rose water, bread cooked from seven grains, dates, cheese, sugar, branches of the holy pomegranate tree, willow, olives, and figs in bunches of three, seven, or twelve, and the Holy book were other items used in the Sofre Haftsin.

In some historical sources, Iranians used to have the Haft Shin table, which was gradually renamed. The components of the Haft Shin table were candles (Sham), wine (Sharab), sweets (Shirini), nectar (Shahd), boxwood (Shamshad), syrup (Sharbat), and anemones (Shaqayegh) or plant branches (Shakh-e-Nabat).

During the Sassanid period, Haft Shin became a common custom of Iranian people, and Shamshad was placed on the table along with the rest of Nowruz’s Shins, as a sign of greenness and immortality.

During the Sassanid period and before Islam, Iranians used to set the table called “Seven Candles” which included candles, wine, nectar, boxwood, Sharbat, and anemones. After Islam came to Iran and their “wine” was declared haram, they put its twin which was vinegar on the table, and this is how Shin changed into Sin.

There is still no detailed information about the history of the Haftsin table, but some researchers believe that the ancient Iranians prepared a table every year to magnify nature and its blessings, and each of its components started with different letters.

The first signs of a table which all components started with the letter Sin date back to the 8th and 9th centuries. It should be noted that the number seven was sacred to the ancient Iranians and had great importance.

The intelligent and meaningful people of ancient Iran usually did not do anything without a purpose or an implicit meaning, and spreading the Haft-Sin table was not without purpose and reason! The experience of various famines in Iran causes fear in people, and little by little it has become a custom that the father of the family prepares seven products (these products must have specific characteristics) and the other members of the family put them on the table. These seven products should:

By preparing these seven products, the father or head of the family promises his family a blessed year and that they will have a happy year ahead. That’s why they used to thank God in advance for the blessings on their table. 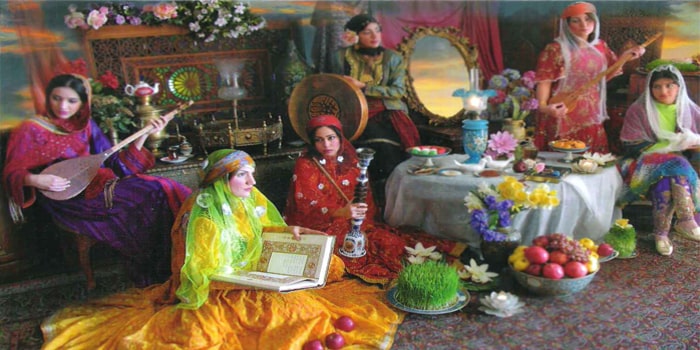 For centuries, on the Eid table of every Iranian, seven kinds of edible and green vegetables whose first letter is “Sin” are arranged, such as (garlic, vinegar, sumac, oleaster, Samano, Sabze, and apples), and after converting to Islam, Iranians put the Quran on their tables and start the new year with Quranic verses. If Muslims place the Quran, Avesta Zoroastrians and Kalimians place the Torah on their tables.

Fish, dyed eggs, and mirrors are also other components of the Haftsin table. Placing hyacinths, coins and Samavar has no truth. Also, the goldfish is the symbol of the new year of China. On New Year’s, the Chinese release goldfish to let life flow.

There were pomegranates in Persian Haftseen, which was a sign of fertility and love. Also, they put the red apple in a container of clean and clear water so that love and fertility will continue.

Nowadays, the Sofre Haftsin is spread on the floor or the table, and family members gather around the Haft Sin table and pray for a year full of happiness and blessings. Some people keep the Haftseen table on the same day of Eid, but others keep the Haft-Sin table for thirteen days of Nowruz, and on the thirteenth day, they throw the Sabze of the Haft-Sin table into the water.

Objects such as clocks, pecan, coins, samovar, and such things have no place in our Haft-Sin table! None of these have the conditions we mentioned earlier. They are not edible, they do not have vegetable roots, they are not obtained from the earth, and they are not Persian! There is no point in putting them on the HaftSin table, but if you are looking for the meaning of Haftsin, you should know that these have nothing to do with our ancient culture.

There were seven choices for greening the Sabze and they included seven plant seeds:

The people of ancient Iran used to grow a handful of these seeds and put them on the door of their houses. Each of these seeds sprouted more, indicating that in the upcoming New Year, the same seed will give them more blessings and results. 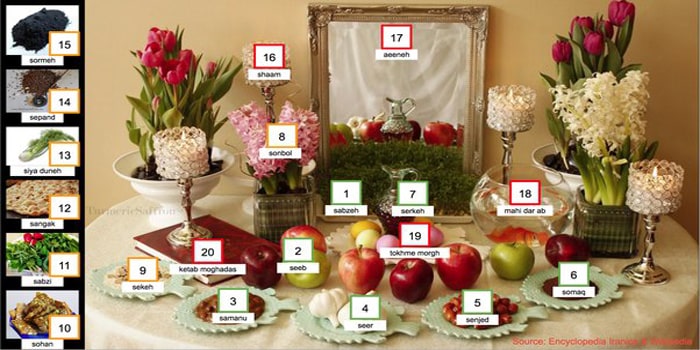 The reason for the number seven in the Sins of Nowruz

In the ancient language, the number seven is called “Amordad,” which means life and immortality, so the ancient Iranians chose seven words as its sign and put them on Nowruz.

Seven was sacred to the ancient Iranians and they used the number seven for positive concepts, auspiciousness, and good omen, for example, seven colors of the rainbow, seven Khan Rostam in the Shahnameh, seven skies, seven climates, seven days of the week, seven angels, seven cities of love in mysticism, seven bodies, etc.

What do the seven Sins of Sofre Haft-Sin symbolize?

Each of the seven Sins of Sofre Haft-Sin is a symbol of a specific topic and carries a message with it. In the following, you will know the symbols and meanings of each part of the Haftsin table. 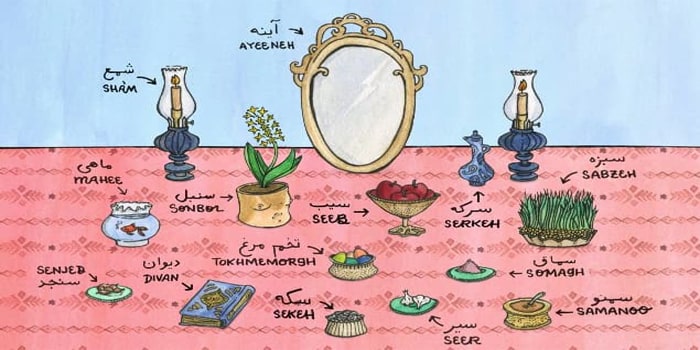 The first thing that Iranians put on the table when setting the Haft-Sin table is the Holy Quran. With the coming of Islam to Iran and the conversion of Iranians and their conversion to Islam, they put the Quran on their Haft-seen table to start the new year with trust and appeal to God Almighty.

Sabze is one of the components of the Haft-Sin table, which makes hearts happy with its color and freshness. Iranians plant wheat or lentils before the new year and in the last days of the year, and some prepare Sabze from the market.

In ancient Iran, 25 days before Nowruz, 12 columns of raw clay were erected in the palace of the kings and a type of grain was planted on each. If the greens grow well, they had a blessed year ahead. Sabze is a symbol of freshness and greenness and indicates human life and its connection with nature.

Samano is a symbol of good and blessing. It is customary in Iran that a few days before the beginning of the new year, they start the ceremony of baking Samano and believe that by doing this, good and blessings will enter their lives.

Oleaster is a symbol of attachment, wisdom, and fertility. An antler on a Haft-seen table is a symbol of affection. The properties of oleaster for the health of the body are so many that children and the elderly can benefit from its benefits. This fruit is also a symbol of acting wisely. Oleaster is placed on the table because everyone promises to do everything carefully at the beginning of the year.

Garlic is another component of the Haft-Sin table, which is a symbol of disinfection and cleanliness of the environment and health of the body, as well as removing sore eyes. For this reason, Zoroastrians used to put garlic on the Haftsin table because they believed that the smell of garlic would ward off bad things. They peel the garlic and then put it on the table.

Vinegar is one of the commonly used liquids in every kitchen, and as we said at the beginning of the article about the role of vinegar in the HaftSin table, it is a symbol of Amordad. This angel has been the myth of immortality of Iranians, and interestingly, vinegar remains healthy for a long time due to its compounds! It is because of this feature that it was chosen as a member of the Haft-seen table in ancient Iran.

Sumac is a combination of the word sumac and a product of a small tree whose fresh fruit tastes sour, but then it becomes acidic and salty. Sumac is a symbol of patience and tolerance and is the embodiment of the sun. This valuable plant has many properties for the body and is usable in different ways.

Other components of the HaftSin table include the following.