The History of the use of women’s skirts

If we were to name just one type of clothing that has remained popular over the years, it would undoubtedly be the skirt. From straw skirts that date back to 3900 BC in Armenia to maxi, midi and miniskirts, and other types of skirts available today, skirts are a huge part of Persian women’s clothing. Although skirts were originally standard clothing for both men and women in all ancient cultures, such as Asia and Egypt, they gradually became women’s clothing in Western Europe and America.

The skirt is one of the clothes that has been worn by women in all cultures and countries from the past to the present day and has many fans around the world. There are different types of skirts that are chosen based on the taste and style of the person. Also, many different designs can be implemented on skirt fabric. Among these patterned skirts is the Persian skirt, which has designs of Iranian culture and art, and these designs are beautifully engraved on the skirt. This type of skirt can be paired with both modern styles and traditional styles.

For the upper body of the Persian skirt, you can use a variety of tops and Persian blouses with long sleeves or short and round sleeves. Also, you can choose the length of the skirt according to your taste as short, on the knee or below the knee and long. The designs on this type of skirt can be from all kinds of pictures to different writings in Farsi or all kinds of Persian paintings from Iranian culture and Persian art. Using a Persian skirt in the style you choose for a party or going out is a sign of your interest in the ancient culture and art of Iran. In the rest of the article, we will scrutiny the history of the use of skirts. 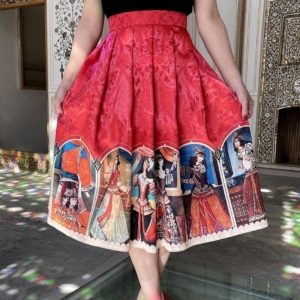 History of skirt use

In the past, Persian skirts were used jointly for both women and men, which was a protection against cold and wind for humans. At the end of the 16th century, the skirt was classically created in Spain, until then they mostly used overalls, and this type of Persian clothing was their everyday clothing, and they even spent their ceremonies wearing the same clothes.

Persian skirt means the bottom of the dress or the side of anything or it also means width. A skirt is a type of coverage from the waist to the knees, or in other models, it is also available up to the ankles. Today, the skirt is for women, but in the past, men also used it.

The origin of the skirt goes back centuries to ancient Egypt. It may seem strange that the first “skirts” were worn by men. These simple dresses were similar to a loose skirts and were called Shandi. This skirt was made from locally grown linen. Linen was light and cool and ideal for the hot and humid Egyptian weather. Wealthy and influential people wore lighter and thinner skirts, while workers usually wore linen longs. On the other hand, women at that time preferred to wear shirts. These Persian shirts were long to the ground and were mainly white. As with men, the lower the social status of women, the cheaper the fabric of their shirts.

Skirt in the Middle Ages

In the Middle Ages, with the development of weaving and tailoring, men began to wear pants and tights tailored to them. As men’s taste changed to wearing short blouses and lace undershirts, they gradually gave up wearing skirts. But the dress was still the first choice of clothing for women. These dresses were cut in a way that followed the lines of the body up to the upper body and waist area and had a long Persian skirt that was sewn to the upper body and corset. Until the late 19th century, when skirts were separated from women’s dresses, women only wore dresses.

Skirt in the 19th century

During the Victorian era, dresses were still the most common women’s clothing. At that time, the customs of dressing were very strict. The dresses covered the whole body. Also, at that time, the corset and seat support were two integral parts of women’s clothing during the early era of Queen Victoria. However, in the late 1890s, as women’s lifestyles changed as a result of riding, cycling, and walking, clothing began to change as well. During the early years of the Edwardian reign, separate coats and skirts were very popular because they did not have the restrictions of the strict and earlier Victorian clothing. From 1886, skirts became less embellished and pleated.

From the 1890s onwards, the skirt became more popular as a separate garment. During this time, more practical clothes replaced the long ones. But the length of the skirts still reached the floor and this issue continued until the 1910s and the introduction of tight skirts. 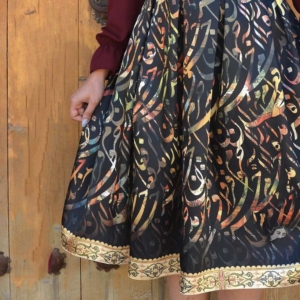 The 20th century was a time of experimentation and innovation in many aspects of society. The Persian skirt was not excluded from these innovations and during this period, different types of new skirts with different lengths were developed. At the beginning of this century, skirts were quite long, but at the end of the century, different types of skirts became popular. The skirt evolved a lot during this era, from tight skirts in the 1910s to miniskirts in the 1960s.

During the 20th century, skirts started to get shorter and the flapper style had a significant impact on women in the western world. In the mid-20s, the hem of skirts rose below the knee, which allowed the beauty of the legs to be seen while dancing or walking. However, after the Great Depression, the situation changed again and the length of the skirts again reached the legs and to the floor and the clothes became simpler.

Since the 1970s, none of the different types and sizes of skirts have dominated fashion, and short, medium and long skirts have all appeared side by side on the streets.

Skirts are an integral part of our clothes. It seems that the Persian skirt makes every woman’s dress more beautiful, it doesn’t matter if this skirt is a medium skirt, a long skirt, a pencil skirt, or even a short skirt; Either way, the skirt completes your look, covers your weaknesses and highlights parts of your body, and it’s your choice to find your style.

Setting boots in style is a very smart choice, especially…

History of chess and Rules of chess game

Persian chess is one of the very old and attractive…

Benefits of using a Backpack

An Iranian backpack is one of the Persian accessories that…

The Persian traditional Pahlevani sport or Zorkhaneh is one of the…

We Ship to Over 100 Destinations