Giving and receiving gifts is one of the most common and ancient traditions among human beings. All human beings often receive gifts or give gifts to others on different occasions throughout their lives. Sometimes it is not necessary to have a special occasion for people to give each other gifts. Considering that giving a gift is an old tradition among all human beings around the world, in this article we intend to introduce the traditional Iranian gifts in the past so that you can become more familiar with the old traditions in Iran about giving gifts. 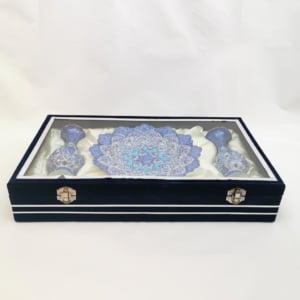 Before beginning with Persian gifts in the past, it’s better to review the traditions of giving gifts throughout history. Giving and receiving gifts is a tradition with a very long history among humans, which historians say has been common since the time of early humans and cave dwellers, and the only thing that has changed is its kind.

In all nations, from the past to the present, we see that giving gifts, especially on occasions, is a tradition to bring happiness and joy to the recipient. People usually try to give a gift to their loved ones that they know they will love and be happy to have.

This tradition has been with people for a long time to create happiness and show interest in others, and it’s only the gift type that is different in each nation and has changed over time. Also, the type of gift should be chosen based on the tastes and characteristics of each person to have the greatest impact on them.

But if you are planning to give a gift to someone you do not know well, do not worry. Some gifts, such as traditional Iranian gifts in the past, can be suitable for any person and make them happy and be seen as precious. 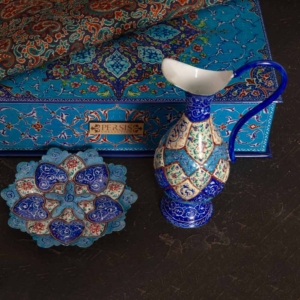 What gifts did people give in the past?

As mentioned, the history of gift-giving dates back to the time of the first humans. This behavior is even seen in some animals such as chimpanzees. For example, they give their female sex a kind of food, and this is an instinctive behavior among them. In ancient times, humans also gave each other gifts such as animal skins, beautiful Persian Gemstones, or the beautiful bark of some trees.

This behavior in ancient humans was more about showing affection for each other and social status and the degree of power the person has. Many men in the time of early humans used to provide the best and most beautiful gifts for their wives to show their power in society. Gifts such as the teeth of a large animal that was killed by them showed their strength.

Later, the gifts took on more beautiful and elegant forms and were more in a way that was related to the recipient’s tastes and position, rather than to the power of the giver. Traditional Iranian gifts have also changed in the same way.

The meaning of the gift and its type has changed a lot in the culture of different countries over time. Nowadays, gifts are very similar all over the world, and no matter what country you are in, giving a watch or perfume can make anyone happy.

Traditional Iranian gifts have been very diverse and beautiful in the past, and some of them can still be considered gifts. In Egyptian culture, the pharaohs received the largest number of gifts during the year, which included very expensive utensils and a variety of Persian gold, and Persian ornaments, and they used to bury the gifts with them.

In the Middle Ages, people used to give precious gifts to the kings of their country as a symbol of loyalty and affection, sometimes including herds of cattle and sheep, and sometimes precious metals such as gold and Persian silver in different forms. Gift-giving has always been a part of the culture of the people of each country, and the type of gifts in the past more than now represented the beliefs and customs of the people of each country.

Traditional Iranian gifts in the past

Iranians with a rich culture from very distant times and about 2500 years ago have a very advanced civilization with very beautiful traditions. The culture of giving gifts has been one of the most important traditions among Iranians throughout history. As mentioned, traditional Iranian gifts in the past can still be used as valuable and beautiful gifts and make people happy.

In the past, Iranians used to give each other a piece of art that was made by themselves or bought from markets, which shows the value of art among the Iranians in the past. Arts such as painting and carving on wood art, metal, and stone-like Persian metal vase are among the gifts that have been popular among Iranians since ancient times. Dishes were also other gifts that Iranians used a lot.

The Iranian people usually gave gifts to show respect and affection to their relatives or to show loyalty and solidarity with the rulers. It is also very common to give gifts to children on Eid. For example, the custom of giving gifts in Norouz, which is often in cash and banknotes, is a very old tradition among Iranians. The tradition of giving gifts on birthdays also goes back to ancient times.

Nowadays, Iranians give gifts on different occasions such as birthdays, graduation, giving birth, buying a new home or vehicle, weddings, anniversaries and acquaintances, Men and Women’s days, Eidsd, etc. to show their love, affection, and respect to another person.