The Persian alphabet letters and Decorative Words & Letters are among the letters that are used by many people in the world to write and convey meaning through writing. These letters contain thirty-two vowels and consonants that, in a certain order, form a very, very large number of words.
The basis of the Persian alphabet is almost the same as the Arabic alphabet and the shape of the letters is very similar to each other, only in some cases, the letters in Persian and Arabic are different in appearance. Also, the Persian Decorative Words and letters have a few letters more than the Arabic alphabet.
The Persian language has 6 vowels, 3 of them are loud vowels and 3 have short vowels. The rest of the letters are the silent letters by which the words are made. Vowels in Persian are not written between words and words are mostly composed of silent letters. Unlike Arabic, where most of the letter sounds are placed.
The Persian alphabet letters are also part of the tradition and culture of Iran, which has brought with it many monuments and art of this country. These are the words and phrases that make history and keep many literary works, Persian poems, and stories alive. The language, despite its changes over the years due to the existence of a solid foundation, helps people to read and learn the history of the past. Therefore, these letters are a very important symbol in Iranian culture, and keeping a symbol of these letters at home in the form of a statue can be a sign of respect for the Persian language and interest in Iranian culture and Persian art. In the following, we will further scrutiny the origin and history of the Persian language. 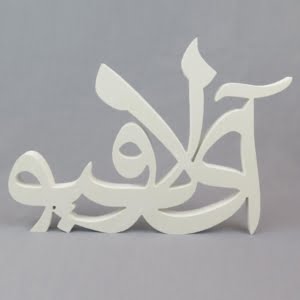 History of the origin of the Persian Decorative Words and letters

The Persian alphabet letters are very old. As you know, one of the means of mental communication between human beings is Persian calligraphy or writing, which was first in the form of illustration, such as the Egyptian hieroglyph, which was depicted to show something, and then simplified and turned into specific symbols such as cursive and calligraphy elementary Sumerian. The Sumerians created pictorial writing 7,000 years ago, and the Egyptians used it 5,000 years ago. After the pictorial script, a syllabic script was created, like the cuneiform script invented by the Sumerians 5,000 years ago, and the Akkadians improved it and others adapted it for their languages, such as the Hittites, Elamites, Medes, and Pars. The Phoenicians, on the other hand, completed the syllable they had taken from the Aramaeans and brought it closer to the alphabet. The Greeks took it and created the alphabet, where each letter represents a sound. Therefore, it can be said that the alphabet, which is used in a large part of the world today, was invented by the Greeks. The history of Persian Decorative Words and letters goes back to the same point.
Alphabetic scripts are of two types: one is a script in which vowels have distinct characters such as Greek and Latin script and the other is a script in which vowels are marked with symbols such as Hebrew and Arabic script. The difference between the two scripts is that the vowel is required in the Greek and Latin scripts, but is optional in the Arabic and Hebrew scripts. It is obligatory to bring the vowels in both Hebrew and Arabic scripts only in the holy book of the Qur’an, but it is optional in other publications.
Iranians have never had a script of their own, and throughout their history, they have taken and simplified the scripts of others and adapted them to their language. No writings have survived from before the Median period and from their reign, and during the early Achaemenid period, court and government records and documents were written in Aramaic, Elamite, and cuneiform, and read in ancient Persian. During the Achaemenid period, the Persians gradually adopted the cuneiform script made by the Sumerians from the Akkadians and Babylonians and made it simple and adaptable to the ancient Persian language, and the same cuneiform was used until the Sassanid era.
The most detailed and important Persian writings of ancient Iran are by Darius the One. Only five short inscriptions have been found from before him, two of which are from Cyrus the Two, the first Achaemenid king. All these inscriptions are in cuneiform. After that, the inscriptions of many other Achaemenid kings survived, which are in cuneiform and have all been read and translated. The cuneiform of ancient Iran, as we have said, is taken from the Akkadian script and has been made simple and suitable for the Persian language. This line has 26 letters and special symbols for numbers.

As we know, the Parthians came to power after the extinction of the Greeks, and Greek script was used for some time the names and titles of Parthian kings were written in Greek script on the coins, but later, when the rule of these rulers continued, a special script was used to write official documents. It was derived from the Aramaic script and was called the Pahlavi script and was used with a slight difference during the Sassanid period. There is no document available to say when and by whom the Aramaic script evolved and led to the Pahlavi script. It is possible to know that this transformation was not the work of one or more people and has been done gradually. Apart from the types of lines called Pahlavi, several other lines were used to write the Persian Decorative Words and letters, all of which were derived from the Aramaic principle.
The Pahlavi script in the Sassanid era to write the Persian language of that time, which is called Middle Persian, is taken from the Aramaic script, which can be considered the mother of all alphabetic scripts. The Pahlavi script is incomplete and it is very difficult to read. At the end of the Sassanid era, Zoroastrian clerics based on the Pahlavi script wrote a script that is one of the best alphabets in the world. This script has 47 letters, each letter of which is a sign of one of the Persian Decorative Words and letters of its time. This calligraphy was invented to write the Avesta, which is a Zoroastrian religious book, and for this reason, it is called the Avestan Persian book script. There was also a language called Avestan, but it is not clear which part of the vast territory of Iran the people spoke in that language at the time.
We do not know exactly when the Iranians used the Arabic script to write their language. Because the oldest Persian historical text in Arabic script is from the fifth century AH, it is certain that long before, the common Arabic and Persian script for writing government letters and documents was common in Iran. To write modern Persian, Iranians have added four letters to the Arabic script for sounds that are not in Arabic, which are (g), (zh), (p), and (ch).