Art of Ghalam zani is one of the old handicrafts of Iran, which is in the group of metalworking. EMBOSS WORKING is the art of decorating and carving various patterns on metal objects, especially copper, gold, silver, and brass with the help of a pen and a hammer.

Art of Ghalam zani in Iran

The history of Art of Ghalam zani is attributed to the time of the Sites who were of Aryan descent. The Hasanlu Gold Cup, discovered in 1957 and featuring reliefs such as the gods on a chariot, dates back to the first millennium. Marlik Gold Cups are also from the works of Art of Ghalam zani of the same period.

From the Median period, which came to power in Iran in the seventh century BC, there are few traces of Art of Ghalam zani .

With the formation of the Achaemenid rule, the art of Art of Ghalam zani also changed and influenced the later period. This period is the peak of the art of metalworking, but due to Alexander’s attack and the burning of Persepolis, many works were destroyed and melted into coins by Alexander’s order.

During the Sassanid period, that is, in the years 224 to 650 AD, due to the expansion of trade between Iran, Greece, and Rome, Iranian art was influenced by Greek and Roman art. The most common dishes of this period were trays on which the Sassanids wrote pictures of hunting and kingdoms, such as gift-giving ceremonies. 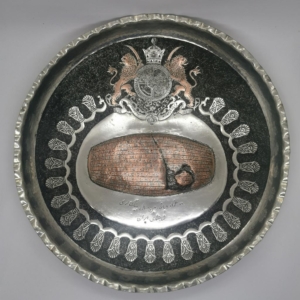 The half-cut lines on the back of the work guide the EMBOSS WORKING operation. After the embossing operation is done, the bitumen is returned to the original position and in this stage, the paving and grounding of the work are done. 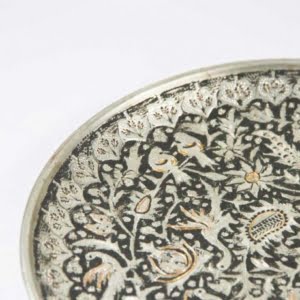 In this art of EMBOSS WORKING, instead of using embossed brushes, ordinary brushes are used, and instead of embossing the work from behind, they lower the background so that the processed surface is visible.

In this method, the work is designed after bitumen and then it is cut and paved and the background is not protruding and more than Islamic flower and chicken designs are used.

In this method, instead of using several pens, only one pen is used and this pen performs the art of EMBOSS WORKING. In fact, in this type of EMBOSS WORKING, metal is removed using a sharp pen.

In this method, instead of laying the ground like tiny EMBOSS WORKING, the ground is separated from the metal surface. This method was commonly used in ancient times in the construction of lanterns and places through which water is to pass.

Most of the metal products made in Iran during the last century are made of copper. Many of these products are made for daily use and are not decorated, and the main element of their beauty is their shape, but copper utensils that have more show value are usually considered by craftsmen and there are artists like EMBOSS WORKING and carving and sometimes outstanding.

Isfahan has always been one of the important art centers of EMBOSS WORKING in Iran and currently, the largest number of persian handicraft workshops in Isfahan are EMBOSS WORKING copper and rice workshops and the number of employees in this field is more than in other fields.

The scope of metalworking art in Iran is very wide; Mesh art can be mentioned, which includes items such as lanterns, patterned lampshades, copper and brass paintings, vases, and bottle covers. The main raw materials used by manufacturers of copper and brass products include copper, brass, and their alloys.

The tools of craftsmen in this field of art of Art of Ghalam zani consist of two categories; A set of tools used in the manufacturing process of products such as bending machines, brushes, electric ovens, anvils, and hammers. Other categories are tools that are needed in the EMBOSS WORKING stage, such as a bitumen drainer, compass, all kinds of iron pens, hammers, and…

History and method of making art of Art of Ghalam zani

The history of EMBOSS WORKING is attributed to the time of the Aryan race. The prehistoric period of the history of this art in Iran has no clear history and detailed information about the first place or the first object on which ghalam zani is hammered or engraved. Not available. The use of metal, especially copper in Iran and the East dates back to several thousand years BC.

In the late second millennium and early first millennium BC, the art and industry of metalworking flourished in various parts of Iran, especially in the north and northwest and the southern shore of the Caspian Sea. One of the most important works obtained during this period is the Hasanlu Gold Cup, which was discovered in 1957 and has prominent motifs such as the gods riding on a chariot or chariot.

In the first millennium BC, metalworking and the art of EMBOSS WORKING in Iran enjoyed special prosperity and prestige, and valuable works from that period have been left, including the Marlik gold cups.

An example of the Iranian art of Art of Ghalam zani, a large cup with a Messi base, is at the entrance of the WIPO Intellectual Property Organization in Switzerland.

The art of EMBOSS WORKING is to decorate and carve patterns on metal objects, especially copper,persian gold, persian silver, and brass, or in other words, to create lines and patterns with a pen with a hammer and on metal objects.

Art of Ghalam zani is one of the traditional Iranian art disciplines that has a high degree of elegance.

Nowadays, for Art of Ghalam zani, the inside or under the container or tray, which is usually made of copper or silver, is first filled with a solution of bitumen and gypsum to reduce the noise of the pen and also to prevent the container from being punctured during work.

After making the maps, the bitumen is separated and charcoal pollen is poured on the grooves and the container is covered with black polishing oil. In this way, the Ghalam zani maps are seen in the form of dark and clear lines.